I and my guides have been on a few physical adventures these past two weeks, visiting places reputed to be haunted or that have the air of grounded spirits being present. This post is lot of show and tell, but I hope that if you are in these areas, you’ll take the time to visit some great locations!

The Flavel House – Portland, OR

Info from the internet states that the Flavel House “was the retirement home of Captain George Flavel, who had it built from 1884-1886. He lived in it with his wife, Mary Christina Boelling, and two of their children, Nellie and Katie. George Conrad, their son, was married and living in his own home.

Captain Flavel lived a colorful life as an entrepreneur and bar pilot, guiding ships through the treacherous mouth of the Columbia River. Astoria, Oregon’s first millionaire, he was revered for his integrity and support for the townspeople. Mary helped manage the household and involve herself in social events.

The Flavel House reflects the Queen Anne architecture, popular during the Victorian era.”

My companions on this trip were certain that I would meet spirits in the house because… well, it just looks like you should. It’s an impressive mansion to be sure. 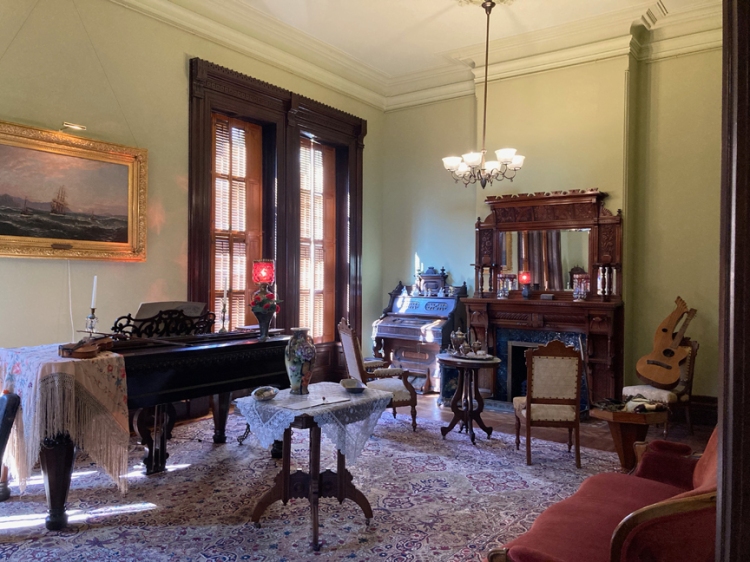 You are able to take a self guided tour through the house with the bedrooms on the second floor. 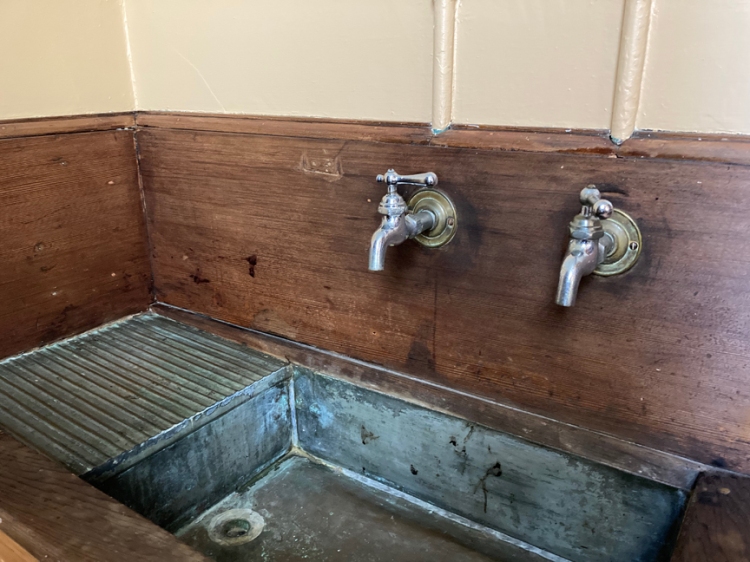 To speak with earth bound spirits, I call on my guide Nat (who was a Canadian soldier during the Civil War. If you are interested in his story and how we met, feel free to do a search on our blog for more info). Nat knew whether I was going to find any earthbound spirits at the Flavel House, but he didn’t let on as he wanted me to experience it myself.

Upstairs Bedroom. The wooden shutters are original to the house and can be found on every window.

I haven’t researched the family who built the house other than what was told to me from the docent at the entrance. They had two unmarried daughters, Mary and Nellie who lived at home all their lives. Nellie’s Parisian jacket is on display.

So, did I find any grounded spirits there? Nope, sure didn’t but once I got outside of the house, both Mary and Nellie came forward to speak with Nat and myself.

They told me that they would have preferred to lead independent lives away from their parents, but women of their social status weren’t given that freedom. Mary wasn’t inclined to marry at all and Nellie suffered from poor health. She showed me that there were times when it was too much effort to get off a sofa. I felt her pain and how heavy her body felt. I don’t know if she was medicated, but she showed me how hazy her vision was and she often felt dizzy. She wouldn’t have had the strength to lead a life where she had to be in charge of running a household – at least not at the time of her life that she was showing to me.

So is the Flavel House haunted? Well not that we saw, but it’s definitely worth a visit.

Okay so if you’ve watched any kind of paranormal show on TV, they’ve probably come to Moss Beach Distillery on the coast of California. I’ve been here several times already. The view is great, the food not so much, but it’s a popular place with tourists. 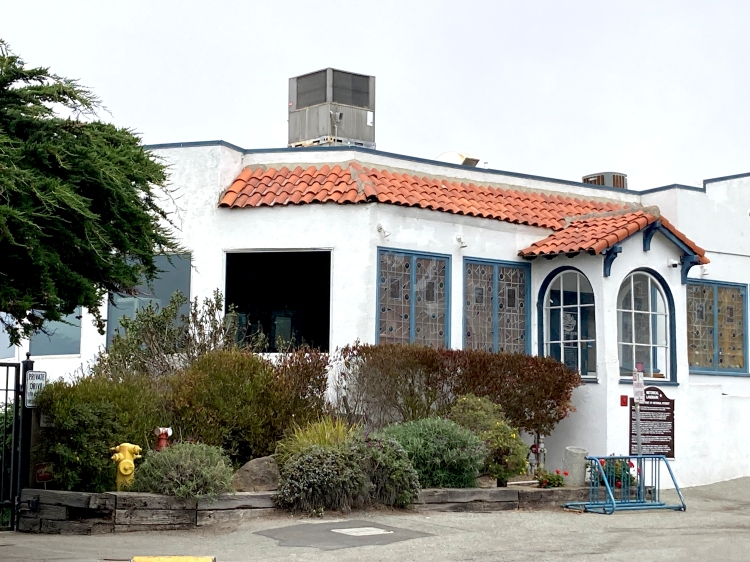 “It is officially designated as a California Point of Historical Interest.  Originally established in 1927 as a speakeasy, it was converted into a successful restaurant after the repeal of Prohibition in 1933.

Owner Frank Torres built the club in 1927. Reportedly, illegal whisky was brought from ships, to the beach, and into vehicles for transport to San Francisco during Prohibition. A variety of people came to Frank’s including the governor of California to Hollywood celebrities, such as actor Fatty Arbuckle.”

I wasn’t able to visit all of the areas of the restaurant – just the main floor, patio and downstairs – all of which are open to the public during opening hours.

A Wedding Reception in Bygone Times

It is supposed to be haunted by a lady in blue. The Moss Beach website says that “the story of The Blue Lady was documented by the TV program “Unsolved Mysteries”, and has been seen by millions of people around the world.”

On this visit, I did pick up on a man’s energy but it was residual – meaning that it wasn’t intelligent and I couldn’t speak to it. It showed me what a strong presence he had and how he was feared in the area, depending on who you were. He had many politicians and government officials in his pay and he wasn’t afraid of getting into illegal mischief.

He was a man who made people jump when he gave an order. Nothing got past him and he didn’t forgive anyone who crossed him. You were either with him or against him. He didn’t have a grey area. His energy is still roaming about the Distillery but is it haunted? Another nope in my book. 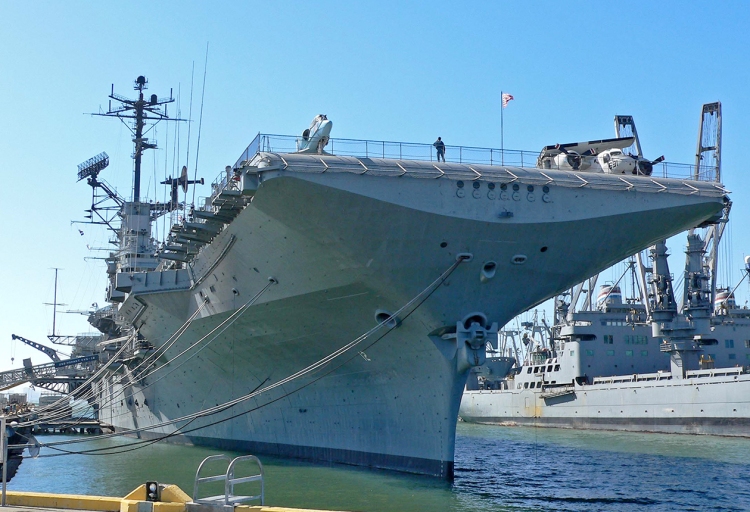 This is the third or fourth time I’ve visited the USS Hornet docked in Alameda, California. Again, I’m giving you a brief history from Wikipedia:

USS Hornet is an Essex-class aircraft carrier built for the United States Navy during World War II. Completed in late 1943, she participated in attacks on Japanese installations. She was badly damaged by a typhoon in June and had to return to the United States for repairs.

After the war she helped return troops to the U.S. and was then placed in reserve in 1946. Hornet was reactivated during the Korean War of 1950–1953, but spent the rest of the war being modernized to allow her to operate jet-propelled aircraft. The ship was modernized again in the late 1950s for service as an anti-submarine carrier. She played a minor role in the Vietnam War during the 1960s and in the Apollo programs, recovering the Apollo 11 and Apollo 12 astronauts as they returned from the Moon.

Hornet was decommissioned in 1970 opened to the public as the USS Hornet Museum in Alameda, CA in 1998.”

When you go inside one of these carriers, it’s amazing to think that it was a floating village with over 3500 people on board. There was two laundries, a surgery, a chapel, and floor upon floor of berths. One of the docents told us that if you were enlisted, your mattress was only a few inches thick whereas, if you were an officer, it was much more comfy. He also said that there is more computer intelligence in a smart phone than on the entire ship!

The spirit energy on the USS Hornet is strong, but they aren’t very interested in coming forward to speak to a medium. Nat and I were prepared for this on our latest outing.

There are many decks to visit and it’s like walking through a maze. When you head out of one room, you are more than likely not gonna remember which direction you should head in. Eventually, I let that go and just started wondering about seeing if any spirit would speak to me.

One place that I remembered seeing a spirit was the Pilot’s Ready Room 4. This is the room where the pilots would be briefed before going out on a mission.

This time, I felt the same energy – a very tall blonde officer who stands in front of the red door in the corner. Nat told me that he was a “mannequin” or “greeter” spirit. So basically, he was there, but I couldn’t have a conversation with him. He stands by the door but doesn’t have any knowledge of current time as we would know it.

If getting lost isn’t your thing, then don’t plan on a visit.

For me, it’s harder to tune into spirits when there are other people around, and it’s not always easy to get into places on my own. While touring the 2nd deck, Nat told me that there were a few spirits who might be interested in meeting me.

Here’s the transcription of my visit that day:

So far, I’m picking up spirits named Henry, Bill and Bob. I’m not sure yet if they are grounded or just visiting, but they aren’t coming forwards very quickly. I’m asking Nat if he can ask them if they want to speak with us or send me to an area where they might feel more comfortable.

I’m entering something that looks like an engine room, but they say that I’m getting cold, so there’s nothing here. I’m gonna keep going.

I’m in a room with berths and I’ve picked up some energy here before.

So far, I’m not picking up any strong energies, but I know that they are here. I’m heading to the bow where the large chains that I’m assuming hold up the anchors are. I don’t know if they will come close enough to talk with me. 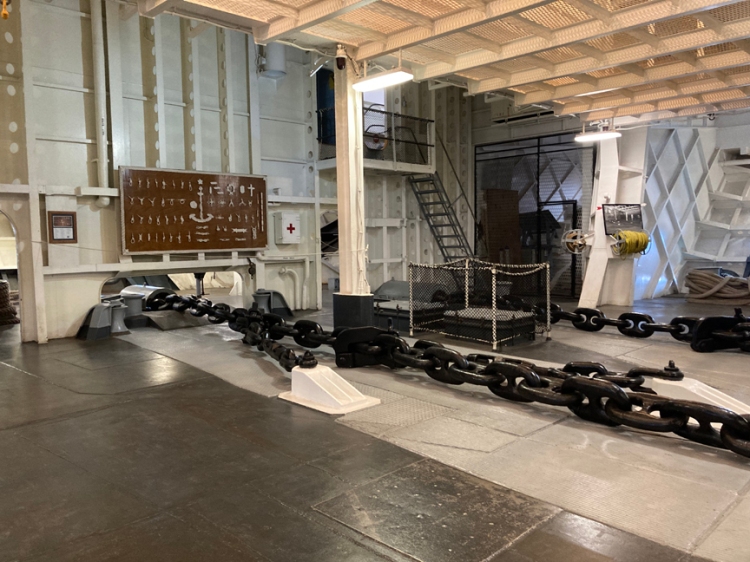 I think that it might be best to just stay put for a bit and see if anyone shows up. Okay I’m picking up a John and Edward. I sense that they want to come closer. They are on a metal walkway above me to my left – wait…no there are three – another named Jeff.

What’s happening is that other people are coming into the area, and then the spirits are backing away. A Philip has joined us on the other side of the room and yes they are all grounded.

Nat can you ask them if there is anything that we can do for them – if they would like our help passing over? Right now, they feel just curious. I’m letting them know that I can see them (after saying that I heard a very loud noise coming from the staircase that they were on).

I’m going to go over to where Philip is and see if anyone else is with him. Philip is lingering back farther than the other three. He is saying that he wants to be called “Phil” and not “Philip”.

At this point, I continued on because they weren’t interacting with me other than letting me know that they were there. I toured the ship for awhile longer and they followed me along the route. Now that I know their energy, I can work with Nat to see if we can communicate with them further off the ship. Nat is telling me that it would be best if I can make another trip to the ship as they feel more comfortable in that energy. So….stay tuned for our next post where hopefully we will be able to communicate with the spirits aboard the USS Hornet and see if we can help them in anyway move back into spirit. They wouldn’t be showing themselves to us if they weren’t interested in the possibility, so fingers crossed!

Is the USS Hornet haunted? Yes it is, but we are hoping to soon help some of those still aboard. 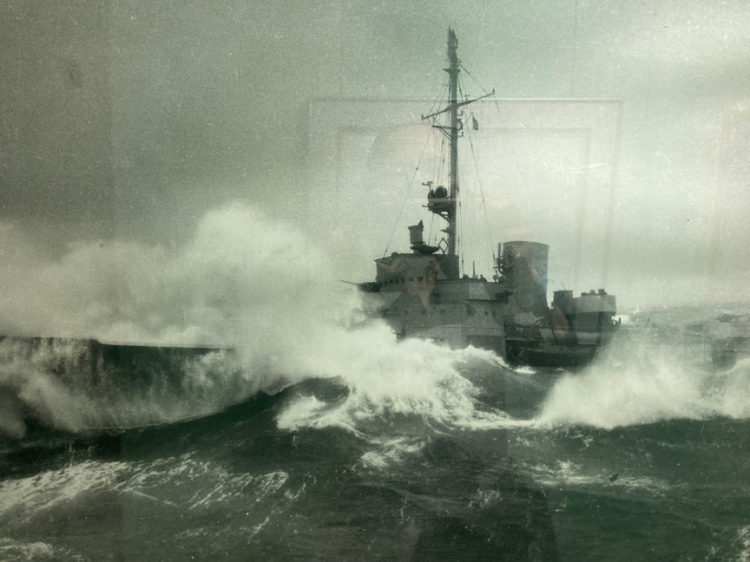 2 thoughts on “Bolan-Beaty Boogie’s Earthly Travels on “Is It Haunted or Isn’t It?””